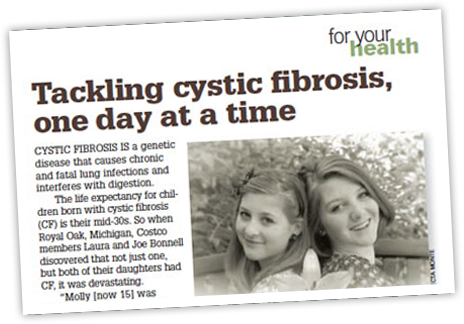 The Bonnell Foundation has been featured in newspapers, TV, lifestyle publications and more

FOX 2 – A local family has made it their mission to help those living with cystic fibrosis and this year — their annual fundraiser will return to in-person for their “Night of Hope.”

Laura Bonnell is the founder of the Bonnell Foundation established 11 years ago to help families living with cystic fibrosis – a deadly genetic condition that impacts the lungs and other organs.

Listen to the interview:

Bonnell Foundation featured in the NY Times
“Fighting for a place in line” for the covid vaccine. Thanks to Amy Harmon, a NY Times Pulitzer prize winning journalist for telling not only our story, but the story of so many others with chronic and fatal conditions who are struggling to get vaccinated. We are honored to be included in this article. So glad our Foundation volunteer, Meg Bauer gets to share her story too.
Read the story here

U of M doctor brings cystic fibrosis awareness to Egypt

Doctors in Egypt weren’t aware of the prevalence of Cystic Fibrosis (CF) in their country until the efforts of a University of Michigan professor brought the disease to light.
CF is genetic disease that causes chronic and fatal lung infections and interferes with digestion.

Doctors have been testing newborns for CF in the U.S. since the mid-1960s. This isn’t the case in other countries. In fact, some health experts do not acknowledge that the genetic disease exists in their countries.

Dr. Samya Nasr, professor of pediatrics at the University of Michigan Medical Center, returned to her native Egypt to try to convince doctors that cystic fibrosis existed there.

‘Frustrated and panicking’: For some rare disease patients, shortages of protective gear pose a continued threat

When the coronavirus sent cities across the United States into shutdown in March, Laura Bonnell realized that her family’s supply of masks and disinfectant wipes was quickly running out.“We didn’t have any N95 masks and we only had about 20 disposable masks,” said Bonnell, whose two daughters have cystic fibrosis, a rare genetic condition that makes infections easier to catch and harder to get rid of by producing a thick, sticky mucus that traps germs in the lungs.

Laura Bonnell, Founder of the Bonnell Foundation talks about the need and scarcity of PPE in the CF community.  Bonnell was asked to speak in the National Organization for Rare Disease Disorders (NORD).  You can see her at about 25:45 in this video.

People with cystic fibrosis (CF) are all too familiar with washing their hands, avoiding germs, and socially distancing.  That is what they must do to stay healthy even when we’re not in a pandemic.

WEMU’s Lisa Barry talks with the creator and executive director of The Bonnell Foundation-Living With Cystic Fibrosis, Laura Bonnell, about her two daughters who have CF.  They have received their lifelong medical treatment at Michigan Medicine in Ann Arbor and face even more serious health challenges due to COVID-19. 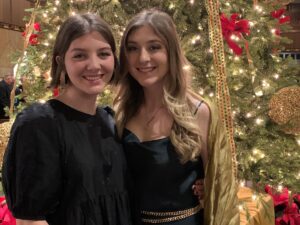 FOX 2 – One family fighting cystic fibrosis turned their fear into fundraising and this year they are going virtual.

Small Talk with Mark S. Lee (910 The Superstation and the Lee Group)

Mark S. Lee talks about people making a difference in their communities. Special guest Laura Bonnell with The Bonnell Foundation.

The Cystic Fibrosis community has been “social distancing” since before the term even existed.  Having a genetic disease that causes chronic and fatal lung infections causes a need for CF patients to remain six feet apart from one another. Listen to Laura Bonnell on the Michigan Motors Forward on Apple podcasts.